Deep Creek Conservation Park and its surrounding regions have a fascinating history to be told.  From the Indigenous Australians, believed to have occupied Australia for over 40,000 years, to the European adventurers and settlers of the 1800’s, many have enjoyed the plentiful wonders that the area has to offer.

The area of Deep Creek Conservation Park lies within lands traditionally associated with both the Ramindjeri and Kaurna Indigenous people.  The majority of the Park falls in the territory of Ramindjeri who lived in the Encounter Bay region and were one of the groups belonging to the Ngarrindjeri people.  The area of Deep Creek comprises a transition area where the boundary of the Kaurna people of the Adelaide plains meets Ramindjeri territory.

Both the Kaurna and Ramindjeri people lived a ‘hunter-gatherer’ life style and they occasionally traveled about their defined tribal lands in family groups.  These Indigenous groups did not have to move around as much as inland tribal groups, since the Fleurieu Peninsula was plentiful in providing food.  Native fruits, nectar, edible roots, seeds and other plants were gathered, while possums, frogs, snakes, lizards, fish, birds and kangaroos were hunted.

The people of the lower Murray, the lakes and Coorong district all spoke a similar language and are known as Ngarrindjeri people.  Eighteen separate groups lived in these areas, spoke a dialect of the same language and all knew variations of the Ngurunderi Dreaming story.  The lands of the Encounter Bay area including Deep Creek belonged to the people of the Ramindjeri tribe.

Locations in the park such as Blowhole Creek feature in the Legends of the Dreaming story about the ancestral being Ngurunderi and this Indigenous creation story tells of the formation of the Pages Islands and Kangaroo Island.  Various place names in and around the Park can be traced to the language of both groups and cultural sites comprising stone chippings and middens have been located within the park.

The Dreaming story of Ngurunderi gave explanations to the tribes for their being, the creation of physical features, plant and animal species and laws for living.  Ngurunderi was a great ancestral being, the shaper of lands, laws and creatures who could travel through time and space, and take the form of man.  The story of Ngurunderi begins where the Darling and Murray Rivers meet and it is a story of how Ngurunderi chases his two wives who had run away after a quarrel, all the way to the tip of the Fleurieu Peninsula.  Along the journey Ngurunderi created plants, animals, land formations and the Mighty Murray River.

The tragic tale unfolds near Kangaroo Island where Ngurunderi is angry as his wives are still fleeing him.  He camps at Granite Island where he heard loud splashing and laughing.  Knowing it was his wives his anger grew and he threw his club to the ground to chase after them.  The club hit the ground and became the headland known as the Bluff at Victor Harbour.

The women ran away along the coast, past Blowhole Creek and they hurried to cross the land bridge to Kangaroo Island, which was still joined to the mainland.  From the top of the cliffs Ngurunderi yelled for his wives to stop and when they didn’t he called in rage for the seas to rise.  His wives drowned in the pounding water and their bodies fell into the sea, becoming what we know today as the Pages Islands.  Kangaroo Island was also formed by Ngurunderi calling for the water to rise over the land bridge.

Ngurunderi then crossed to Kangaroo Island, where he made a huge swamp oak tree to rest under.  The sound of the wind through the trees made Ngurunderi mourn his wives and he knew the time had come for him to leave this world. Ngurunderi dived into the sea to prepare to enter the spirit world.  He can be seen there in the night sky, as the brightest star in the Milky Way.

Settlement of areas in and surrounding Deep Creek occurred progressively from the late 1850’s when farms were established.  The nearby Talisker mine was discovered by the McLeod brothers of Cape Jervis in 1862 and the silver and lead mine was worked continuously up till 1872.  Other early structures in the area included a stone hut and a woolshed, which were built near the mouth of Deep Creek prior to 1884.  During the mid 1880’s land grants were given and apart from farming land uses included wattle bark stripping and later during the depression years people collected Yacca gum.  Some cutting of timber also took place in the Park as stringybark was used for building material and fence posts around the Boat Harbour area.

From the 1920’s onwards further settlement of the area occurred with a concentrated effort to clear land for farming. Properties within and surrounding the Park were progressively developed including areas, which still bare the early names given to them, such as Tapanappa, Tent Rock, Goondooloo, Callandra-brae and Augulong.

It wasn’t until 1965 that the environmental significance of the Deep Creek area was recognised and the State Government began purchasing land to eventually form what is now known as Deep Creek Conservation Park.

If you are unsure about the significance of Deep Creek Conservation Park then here’s a statistic to reflect upon: Since European occupation of the Fleurieu Peninsula began in the early 1830’s, 90% of the land has been cleared.  Of the remaining 10% scattered throughout the Fleurieu, Deep Creek Conservation Park represents the single largest block of native bushland.  Its importance as a refuge for a diverse range of flora and flora is self-evident and we can thank our forebears for recognizing its significance.

The area was being used by bushwalkers as early as 1930 as is shown in an article written in The S.A. Naturalist by Mr. L. Reynolds:

“The State possesses an almost unknown rugged coastal gem unspoiled and unpolished by the ways of man.  To those who are lovers of natural scenery, to the botanist and marine scape admirers, to the camera enthusiasts, and to the army of the young and active, and all those who long for the unbeaten ways, I recommend this trip (Cape Jervis to Victor Harbor), that they too may see and appreciate our Southern Heritage”.

The first formal proposal to set aside an area for a reserve on the Southern Fleurieu was made in late 1961 by Mr Albert Simpson, the Director of the National Fitness Council who recognised the area for bushwalking, camping and the need to protect the rapidly diminishing scrubland.

On March 13th, 1967 a meeting was convened by the National Fitness Council with representatives from other interested bodies such as the Adelaide Bush Walkers Club, the S.A. Ornithological Association, The S.A. Museum, the Field Naturalists of S.A., Boy Scouts and Girl Guides Associations and the Commissioners for the National Parks and Wildlife Reserves. Without exception all present fully endorsed the setting aside of an area for conserving the remaining natural scrubland.

Additional acquisitions from 1974 to 1977 enlarged the Park size to 1478 hectares with a further 1651 hectares dedicated in 1982. The final dedications of land took place in 1987 bringing the total size of the Park to its current 4200 hectares.

The Talisker Silver Lead Mine is located approximately 7 kms west of Deep Creek in the Talisker Conservation Park. Discovered in 1862 by the McLeod Brothers while prospecting for gold they named the silver-lead lode the “Talisker of Scotland” after their hometown on the Isle of Skye. 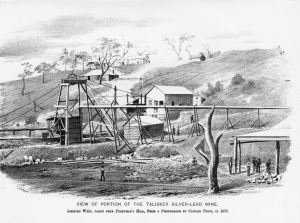 A company was formed in the same year and for the next 10 years the area was leased and mined with mixed fortunes.  The mine closed in 1872 but reopened briefly in 1890 and again 1917.  The lease area remained as un-allotted Crown Land until 1976 when the State Government took the area as a reserve. In 1985 it was dedicated as the Talisker Conservation Park.

The ruins of the mine site are accessible to the visitor.  A self-guided walking trail explains features of the mining site and superb views of Backstairs Passage can be seen from the hill above the site where the mine flues were once located.

The mine shafts have been fenced off for safety, but please exercise control of children while visiting the area.  To preserve this unique historical site and for your safety, please don’t climb on the ruins as they could be unstable.

Relax, explore and settle in for the night. We offer a range of accommodation in Deep Creek Conservation Park located on the Fleurieu Peninsula, just 90 minutes south of Adelaide, South Australia and 10 minutes from the Kangaroo Island Ferry.