Deep Creek Conservation Park is the largest area of untouched vegetation on the Fleurieu Peninsula with a wide range of native animals calling it home.  In excess of 100 bird species have been recorded with at least 10 species being listed as vulnerable.  The Yellow Tailed Black Cockatoo uses the Park for breeding after wintering on Kangaroo Island.  It can be seen in increasing numbers from October to March and has become synonymous with Deep Creek.

The area near Tapanappa campground becomes a birdwatchers paradise when the Cup Gum (Eucalyptus cosmophylla) is in flower from mid April to late May as Honeyeaters flock to the flowers heavy with sweet nectar.  Other good areas for birdwatchers are around the Boat Harbour trail and adjacent to Trig Campground.

The Park is also home to 11 recorded species of Mammals.  The shy Yellow-Footed Antechinus and vulnerable Southern Brown Bandicoot live in the Park’s woodlands and Eucalyptus forest.  Although they are rarely seen by visitors a quiet walk at dusk along the Spring Wildflower Walk Trail off Black Bullock Road may be rewarding.  Seven species of Bats which flit through the early evening skies hunting for insects are most active in the late Spring and early Autumn.

The most commonly seen mammal is the Western Grey Kangaroo (Macropus filiginosus).  A drive in the late afternoon or early morning along the Tapanappa Ridge will normally reveal the Kangaroos feeding within close proximity to the road. 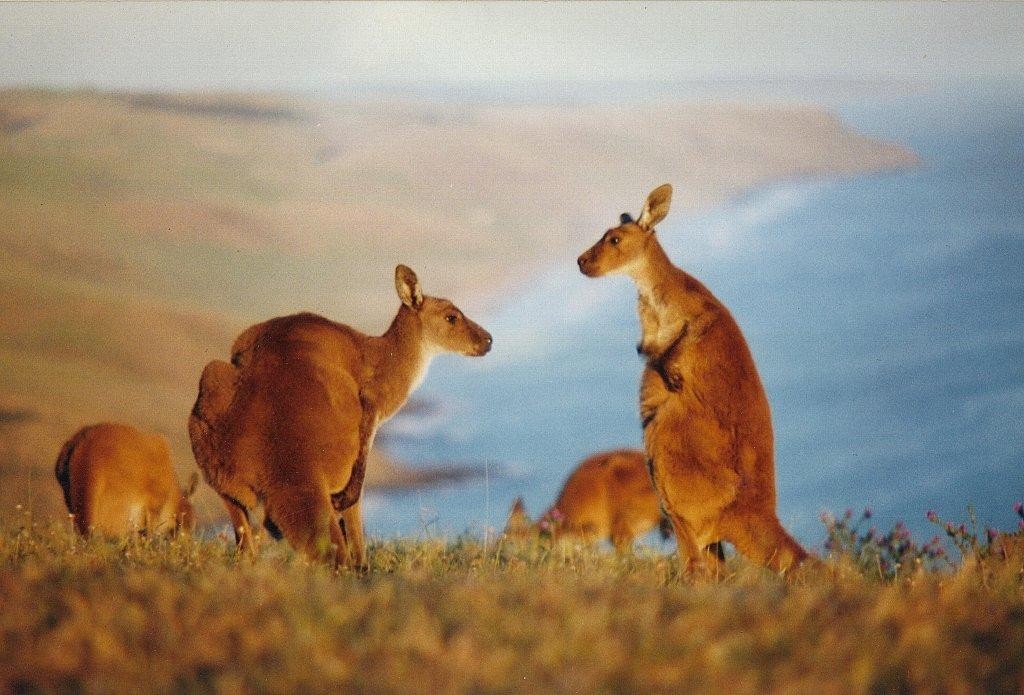 To date, approximately 380 species of Native Flora have been recorded in Deep Creek Conservation Park.  Many of the plants have been given a Vulnerable Status and some listed as Endangered.  The 32 Rare Status species which are found make Deep Creek an area of extreme importance in preserving these species.

The following 6 vegetation formations have been identified in the Park with approximate percentages of each as follows:

During any season, wildflowers may be observed along the walk trails, but spring is the time to see the Park for its floral beauty. As if awakening after the long cold winter months Deep Creek comes alive with vivid splashes of colour from August to early December.  Most areas boast wonderful displays of wildflowers, but for leisurely strolls to observe the flowers, the spring wildflower walk off Black Bullock Road and the walk trail to Deep Creek Cove from Trig campground are excellent.  A plant list is available from the Park Headquarters.

Seventeen species of Reptiles and four species of Amphibians have also been recorded in the Park.  To date no survey to record the diverse Insect population has been attempted.   If you require lists of species, please visit the Park Headquarters to speak to a Ranger.

Domestic Pets are natural enemies to our native fauna and are therefore not permitted in Deep Creek Conservation Park.

First some basic facts about fungi: Fungi are neither plant nor animal.  They play a vital role in the breakdown of other organisms and are the great recyclers of our ecosystem.  Put simply, plants produce, animals consume but fungi recycle.  By breaking down organic material they provide nutrients to enrich soils that are essential for plant growth.  The visible part of the fungi that we see is its ‘fruit’.

Fungi feed on either living of dead organisms by producing long thin threads called hyphae that spread into the food source. The hyphae release an enzyme which breaks down the food in a form that the fungi can absorb.  Most fungi feed off dead organic matter and are called saprophytes. A small percentage feed off living organisms and are hence known as parasites.

Fungi can be both beneficial and harmful to humans.  The adverse effects are readily visible when food deteriorates and mould appears. However, fungi can also be used to preserve foods and beverages through fermentation such as in the case of antibiotics, organic acids, alcohol and cheeses.  World wide there are estimated to be 1.5 million species of fungi of which some 160,000 to 250,000 are found in Australia.

So where does Deep Creek Conservation Park fit in?  Well, as it happens the Stringybark Walking Trail is somewhat of a fungal hot spot due to the type of vegetation and favourable conditions that have prevailed for many years.  Whilst studies are ongoing a total of 247 macrofungal species have been observed on the Stringybark Walking Trail to date (Catcheside & Catcheside, 2008).  During winter an extraordinary assortment of fungi can be observed in bloom along this trail.  The diversity in shape, size and colour is staggering and well worth the visit even for those with only a casual interest in nature.